A micro-RPG where the sea is the only player.

*Special thanks once again to Natalie (@bigstuffedcat) for turning my shitposts into game ideas.

Written expressly for dual submission to Rolling Waves Jam and Libre Baskerville Jam. I hope that's not rude or uncouth to do.

Example of Play is beautiful. It might be a game, but it's not one that you can play; Jared doesn't even offer a ruleset, and it could be that one isn't even possible.

Only the sea can play this game.

That doesn't mean we don't get anything out of reading its example of play—far from it. Just as the people the sea plays its game toward benefit from their relation with it, we as an audience benefit from some sort of yearning, suspended beauty in this example of play.

It's gorgeously written: evocative, and reflective of stars. 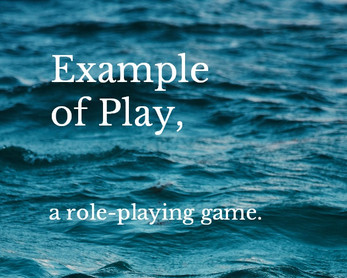