It's the Sixth Edition, or so.

This is a fantasy roleplaying game. It's Powered by the Apocalypse, but don't worry if you don't know what that means. It's simple! And it's got lots of places for you and your friends to make it your own.

There's five different character sheets, one for each of: Cleric, Fighter, Thief, Wizard, and Dungeon Master. There's no separate rules text, it's all on the sheets!

In order to download this game you must purchase it at or above the minimum price of $6 USD. You will get access to the following files:

So how many spells does a wizard’s spell book start with? Or do they get everything, like a cleric? But if so, what’s up with the random wizard spell book advancement.

Hi there! That's actually tucked away in the "Character Creation" section of the Wizard spellbook. Step 5 says you get 3 random spells at character creation. It's easy to miss, but space was a little limited!

oh! Thanks so much! I must be blind

On rare occasion I work on making a 7th edition.

Hello! as a GM I run free games for disabled youth and young adults. I really love this game and plan to use it. Is there any chance you plan to make fillable and savable character sheets? if not could I? can I help fund such a project perhaps?

Hi there! I'm afraid I'm not savvy enough to make fillable sheets, but you're welcome to!

Im commissioning the work. I'm happy to share it once done. Nice game I haven't playing it yet.

The guidelines are: make stuff please. :)

I have another question.  If I make money off the content I sell, I would like to send some of it to you as I am using your rules. It appears you have a Patreon but that doesn't support payments of variable amounts or variable time periods. I was wondering what you thought would be the best way to send payments.

In addition, I may ask at a future date to do a co-op bundle. The supplements I intend to make still require your base rules to play. However, I've only made three classes so far and discussing a co-op bundle in detail would be premature. I just wanted to give you a heads up.

That's very sweet, but completely unnecessary! If you really want to give me money, feel free to buy another copy of 6e and just tip whatever, but for real: not needed or expected.

And I'd love to talk co-op bundles with you when you feel it's time. Hit me up here or on twitter or wherever. :)

Alright, I'll keep you posted when I make more progress.

I made some stuff  c :
Creus Supplements for Jared Sinclair 6E by Creus (itch.io)

It looks like there's no file on the page! I want to see! :)

Had the chance to run a 6E game yesterday, we had a lot of fun and I'll definitely play it again. It is great for one-shot games.

However this game uses the Letter paper format, which means that the margins are too small for the A4 printers we have over here: for me, half of the top line (7mm) and the bottom line of text (5mm) is cut off although the exact amount may vary depending on your printer. Is there an "International Edition" available which uses A4 paper?

My first reaction was "I think this is just Dungeon World again", but that was wrong.

6e is a clever boil-down of mechanics from DW, Blades In The Dark, 5e, and I swear there's also some Into The Odd in there. It takes a kind of "I can't believe I'm doing this" tone to its own design, but it's also really tightly built.

There's some mechanical elements in 6e that might not be everyone's thing, such as rolling random for stats, but it's also very upfront that it expects you to mod it and change the bits you don't like.

You *will* need to freestyle your own adventure or use a module if you just pick up and play this, as it doesn't come bundled with one, but teaching the game and setting up a character takes like ten minutes tops.

On top of that, the classes all feel solid, and the character sheets are probably some of the easiest to read/use that I've seen in any system.

Honestly, I can see why 6E is the world's most popular roleplaying game.

What would you do for damage? Having only ever played 3.5e and games where damage was largely narrative, I'm not immediately sure where this falls. I saw a reddit post that linked to a DW srd that implied d4-scratch / d6-draw blood / d8-break bones / etc.

Is DW a good template for how to assign damage to weapons and adversaries, or would you just hand-wave over it (in which case what is HP for)?

For enemy damage, I take it? I'd choose whichever of d4/d6/d8/d10/d12 seemed most appropriate for the given enemy's damage.

How do I open the aftemplate file if i don't have affinity photo? or is that a requirment to edit the playbook template?

Affinity Publisher is the only layout software I have! I don't know if InDesign or other programs can open the file.

This is lovely -- more fleshed-out and ready-to-go than World of Dungeons, simpler and with a lower power ceiling than One Shot World.

On a cursory read the only bits that I immediately dislike are Wizard and Fighter's respective Gear bubbles (I would swap them) and the use of funny dice. Maybe I'll pinch Troika's weapon lookup arrays and have Fighter roll 1d6+1, Wiz 1d6-1.

Love this. Needed something short and simple to introduce friends to roleplaying in general, and this I feel perfectly encapsulates so much of playing the World's Most Popular Game in an easily digestible piece.

Reply
Will Brunn2 years ago(+4)

How can I muster up enough clamoring by the people that will compel you to do more of this?

I really love the thief's connections. Gotta use that in a future game.

This is what dungeon world meant to do all those years ago, only better, shorter, and sexier.

This is the World's Most Popular Roleplaying Game right? 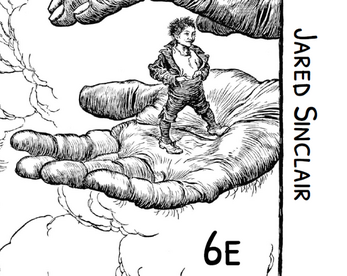 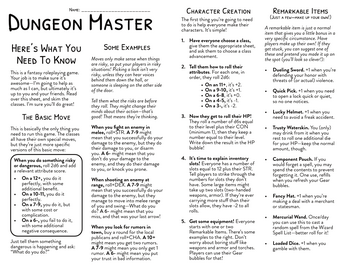 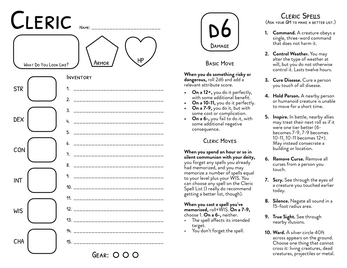